If you’ve ever had to talk or write about yourself, you probably understand how awkward it can be to write an “About” page.  That being said, I hope this page is less about “me”, and more about welcoming YOU!  This site is a place to share my music with you, open my heart up to you, and hopefully engage in a two-way musical relationship with you.

My name is Sol Rodriguez, and it’s been over 20 years since I began my journey into the depths of music making.  Truth be told, after all this time, I finally feel like I have something truly worth sharing and I appreciate you taking the time to be here and check it out.  This is my most proud musical creation!

The new project/band is called Slow Sunrise.  If you’ve ever been in a band or know a musician, you know naming your band can be one of the most difficult decisions you make along the way; it’s like naming your baby.  So, why “Slow Sunrise”?  The significance of the name is tied to my name: Sol.  In Spanish, my name means “the sun”.  In order to understand why this is a “slow” sunrise, allow me to give a brief account of my story:

After being happily married for almost 8 years, my young wife passed away from a rare and aggressive cancer.  In the midst of the heartbreak and the responsibilities of being a single father, I was unable to truly commit to the musical project I was working on at the time, Greenleaf Avenue.  It was a difficult time for me, to say the least, and I wondered if there was room in my new hectic life for music at all.  At one point, I actually hoped and prayed that I could just leave music for good and focus on my son and career…like normal people do.  For better or worse, it turns out that it wasn’t mine to decide if music would be in or out of my life.  Music chose me, and it wasn’t ready to let go.  I simply couldn’t stop longing to play music.

It was time to pick myself up from the boot straps and see where the music would lead me.  As is often the case when one is emotionally charged or burdened, I was hit by musical inspiration and release.  It was fantastically healing, and I decided to march onward and allow music to remain in my life.  However, my responsibilities were heavy and creative time was limited.  I knew it would take commitment and determination to push forward, but I pledged to make sure the “sun would rise again”, even though I recognized it would be a “Slow Sunrise”.

When I set out to start writing new music, I didn’t really have a particular sound in mind.  Over the years I had played everything from Classic Rock to Reggae to Metal to Top 40 and Salsa.  I even dabbled in a little Hip Hop in college!  I’m a great lover of music in general, and I can usually find something worth listening to in any genre.  I decided the most important thing at that point was to simply be authentic and let the music flow without any specific boundaries.  After writing 17 new songs in a couple of weeks, I had an interesting and varied mix of songs that were all over the map.  Some were beautiful and hopeful, others were dark and melancholy, many were simply anthems of escapism.  Though they were all different, there was an underlying theme among them: they were all authentically me.  What I ended up with is a mix of styles that sounds like a cross between Santana, Depeche Mode, Sade, Enigma, Shakira, Billy Idol, Mana, Pink Floyd, Duran Duran, and even Bob Marley! Seems a little crazy, right!?  I decided it didn’t really matter what it sounded like in the end, what was more important to me was what it “felt” like; it wasn’t as much a musical project as it was a catalyst for people (including myself) to feel something…and guess what, ultimately that eclectic mix of sounds is refreshing and new!

As I continued to develop and record them, I realized that I couldn’t do them all at once, so I picked several to focus on.  The songs on this first CD (also entitled “Slow Sunrise”) are dancey, with Latin rhythms, and seductive melodies.  I kept most of the darker, heavyhearted songs for myself (for now). 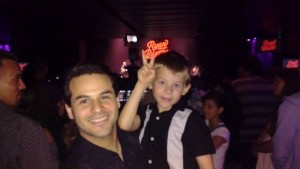 Me and my son Kai at a concert.

Thank you for visiting this page and web site.  I look forward to sharing so much more with you.  It’s hard to express how much I appreciate you listening, encouraging, and supporting my music.  I really do hope it becomes “your music” too!